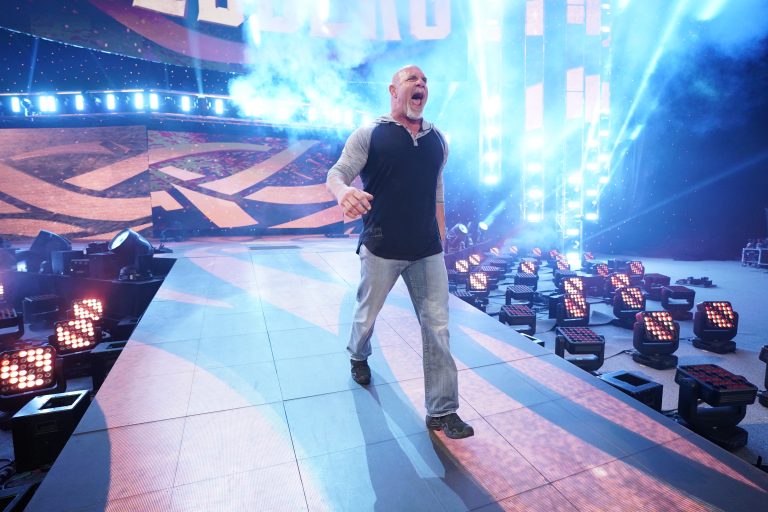 The legendary Goldberg takes on WWE champion, Drew McIntyre, at the Royal Rumble pay-per-view this evening as the road to WrestleMania kicks off.

Here is an exclusive Q&A with the 54-year-old veteran ahead of his return to the ring for the first time in almost a year.

Have you been watching Drew’s run as WWE Champion over the last year? How do you think he has done?

I haven’t watched all of it but I have been attentive, no question. Even though I have been away you need to check in and make sure that your product is being represented by the right people. I’m a fan of Drew. I appreciate what he has done. I appreciate the long road to his success that he has travelled. My question though: is he ready? We’re not going to know until he steps in the ring with me.

Can we expect any surprises in your strategy against Drew this Sunday?

I don’t think you’re going to get any surprises, that’s if you’re a logical human being understanding what Drew’s strengths are and where I need to put chinks in his armour so that I can destroy him. If you look at breaking down an opponent logically, no one will be surprised as to what I do.

WWE Superstars have come to the squared circle from a variety of different places: professional football, mixed martial arts, Olympic powerlifting, rugby, and more. Do you think there is an advantage coming over from competitive sport?

A thousand percent, yes. There is no question that it gives you an edge. Whether it be on the mic or athletically performing your craft, your new found craft. You have quite obviously a physical advantage depending on where you are coming from. You wouldn’t have been tabbed a “professional athlete” if not. You cannot get by faking it as a professional athlete. It does not work like that. You are always asked to perform a job and if you do not do it you do not cut it. Also you learn how to deal with the media. You have the ability to deal with any situation. Playing in the NFL you were on live tv. You do have an advantage, there is no question about it. Anybody who would tell me any differently is a moron.

Any sports star you think could have what it takes to make it as a WWE Superstar?

You know there are many out there I think that could cross over. Do they want to? I think the ones that could do it have never been brought up in the conversation. I think professional [American] football players are the number one hotbed of talent to make the transition. I really do. I say that not as an ex professional football player but I say that as a realist. Knowing what they go through, knowing their work ethic, knowing their attention to detail, their savvy with PR. Rugby might be the next one in line.

You’ve also had success in film and television, with many citing The Longest Yard as a particular highlight. Can we expect more movie roles in the future?

I always like to tell people that I’m a competitor not a performer. I never aspired to be a television star or a movie star, anything like that. That’s not in my plans by any means. I enjoy it. Being on ‘The Goldberg’s’, being on ‘NCIS’, we’ve got a new show being developed right now. An action series. Then there’s a car show… I like doing things that I enjoy. Doing a series like an ‘A-Team’ and me being a lead of it? That’s right up my alley. Doing a car show and racing across the country. That’s what I love to do. Do I aspire to be that guy on TV? Not at all. As far as doing something that’s a far departure from my normal everyday life… I don’t foresee that as my future.

Stone Cold Steve Austin recently spoke about being confused for you in airports back in the day, with shouts of ‘GOLDBERG!’ wherever he went. Did you ever get confused fans shouting ‘STONE COLD’ at you?

Well firstly he should be flattered because I’m a hell of lot better looking than he is. It used to really p*ss both of us off. We’ve talked about this exponentially because I like to say we’re pretty good friends. I always took it personally and it made me mad because Steve Austin is, like, 250lbs and I was like 285lbs / 290lbs. So I thought that if they thought I was Steve, then they thought I was small… I took that as a slight. Not because they thought I was Steve Austin the awesome wrestler, but because I was small. So there’s another layer to it. Throughout the years we used to both get really p*ssed off, now I think it’s hilarious. We actually try to bring it up to each other when it happens. It’s pretty fun.

Austin vs Goldberg is considered by many to be the dream match that never was. Is that one you look back on and wish could have happened?

Oh my god, I wouldn’t be living and breathing if I didn’t make that statement. There was no other match for my sake that needed to happen more so than that one. It was a timing issue, it was just a timing issue, and an injury issue. I love him exponentially, man, he’s a great dude and to have graced the ring with him in a match would have been absolutely phenomenal.

You have travelled the world. Where are the some of the places you loved to visit, and why?

I took a trip to Glasgow (Scotland) and did a signing and it was absolute drop dead one of the most gorgeous places, one of the coolest places, that I ever set foot. Saudi Arabia was awesome. It was completely different than the impression that you have of it. It was definitely different for me. Going to Japan, I always loved Japan. Australia was unbelievable. Playing football in the world football league, going to Germany and going to Barcelona (Spain). Going to London is awesome. So many wonderful places. You know, I really miss the sushi in Japan.

Are there any younger talent you’re looking at and thinking “they are massive stars of the future”?

I mean the usual suspects… Drew McIntyre, Keith Lee and Ricochet. I’ve always been a HUGE fan of Finn Bálor. I’d have to say those four are the future. There’s no question about it. In my opinion. And what do I know?

Assuming you become WWE Champion this Sunday, who would you like to see win the Royal Rumble and challenge you at WrestleMania?

Wow. That’s an interesting question. You know, I’m going to plead the 5th and just say I don’t care. It doesn’t matter. I’ve got to get through Drew first. He’s the only one on my mind, I’m not looking past him for one second. He deserves the respect from a guy like me, he really does. I hope that I can conquer him, absolutely. Whoever the opponent is that wins the Rumble and gets to compete against the Champion at [WrestleMania], it’s going to be a wonderful fight whoever it is. I’ve got to kick Drew’s ass first.

The 2021 Royal Rumble will be broadcast live on SuperSport’s WWE channel from 01:00am on Monday morning.