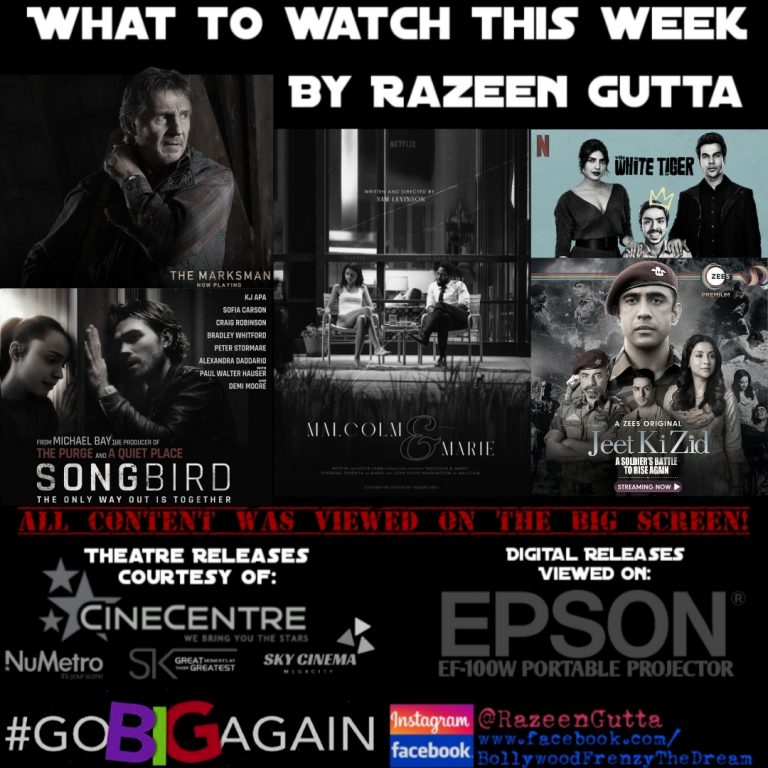 It’s Valentine’s weekend at the movies… Last year this time we were relishing in Malang at Cine Centre. Everything was still well in the world and the film turned out to be the best that 2020 had to offer. Unfortunately, not long after that, cinemas closed for months; and things just haven’t been the same since.

Now, though, whether you’re at home or ready for a trip to the movies; and whether it’s Bollywood or Hollywood content you’re in search of — it’s time to Go Big Again!

The first of our three digital recommendations is a story of the army behind the army. Based on true events, Jeet Ki Zidd follows the inspirational tale of Special Forces officer Major Deep Singh (Amit Sadh) and his dream to achieve the impossible.

The cut backs after each episode to the real-life heroes (on whom the show is based on) adds a different dimension, while Amit Sadh, Amrita Puri and Sushant Singh all excel in terms of performances. Highly recommended!

Malcolm and Marie is our next recommendation. Starring John David Washington and Zendaya, this one is directed by Sam Levinson and tells the story of one night in a couple’s life. The film features one setting and just the two performers and is shot in monochrome (our headline photo edit is certainly inspired by this).

A film this unique is a spectacle in its own; and even though I believe the script could have taken it to different levels had it been tightened a little more, the towering performances, classic cinematography and well-balanced soundtrack definitely mean there is more than enough to get by.

One line from the film stayed with me: “Cinema doesn’t need to have a message, it needs to have a heart and electricity” — this one has both.

Malcolm and Marie is now streaming on Netflix and rates a 7/10.

Next up is our final digital recommendation and arguably the best piece of cinema to have released so far this year. It is a film that has a tremendous star cast, superb direction and a neat script.

Based on the bestselling novel, this one is directed in fine fahsion by Ramin Bahrani while the stunning cinematography by Paolo Carnera and a mind-blowing, breakthrough performance from Adarsh Gourav make it a fascinating watch.

The White Tiger is now streaming on Netflix and rates an 8/10.

Even if you’re enjoying a digital release this weekend, it could be time to Go Big Again! Laudium Online have partnered with Epson to enjoy an unparalleled home theatre experience courtesy of their EF-100W Portable Projector.

With grandiose lighting and large projections, you really can bring the cinema home! Visit their website to find out more.

Moving on to our cinema reviews, now, there are two big Hollywood releases to focus on.

The first is The Marksman. Starring Liam Neeson in the lead role of Jim, the film tells the story of a former marine who lives as a rancher on the border of Arizona and Mexico. When the young Miguel (Jacob Perez) and his mother Rosa (Teresa Ruiz) flee Mexico to get away from the cartel, the pair cross paths with Jim who must become an unlikely protector.

This one has Liam Neeson at his typical best; and while it is predictable, the action and performances make it an engaging watch.

The Marksman is now showing in cinemas nationwide and rates a 6/10.

Finally, it’s time for something real, relevant and romantic. Set in the not too distant future, Songbird tells the tale of a couple who risk it all to be together amidst the pandemic which has only worsened. KJ Apa of Riverdale fame and Sofia Carson (Descendants, Feel the Beat) deliver masterful performances as the film shifts you to a dark place.

Director Adam Mason absorbs you into his story and ensures you produce a smile above and beyond this locked down world. Highly recommended!

Cinema viewings are courtesy of Cine Centre: they bring you the stars!

Funeral of of Late Essop Jalalpor